Edinburgh Airport’s Community Fund has contributed £300 to Queensferry Rowing.  This will help the club buy new life-jackets for the second skiff now under construction.

Key figures in the creation of the Queensferry Rowing Club and the building of the club’s first skiff, Ferry Lass, have been given honorary memberships.  At a ceremony on Friday, 23 November, Club Captain Siobhan Johnson handed certificates to Mike McDowall and John Watson.  Certificates were also awarded to Stuart Ridge, as well as Malcolm Miekle and Michael and Elizabeth Johnson, who were unable to attend.

The launch of Ferry Maid has received some press attention! The Caledonian Mercury has both an article and video of the launch.

[Editor’s note: The Caledonian Mercury is now defunct, but the video is still on YouTube.] 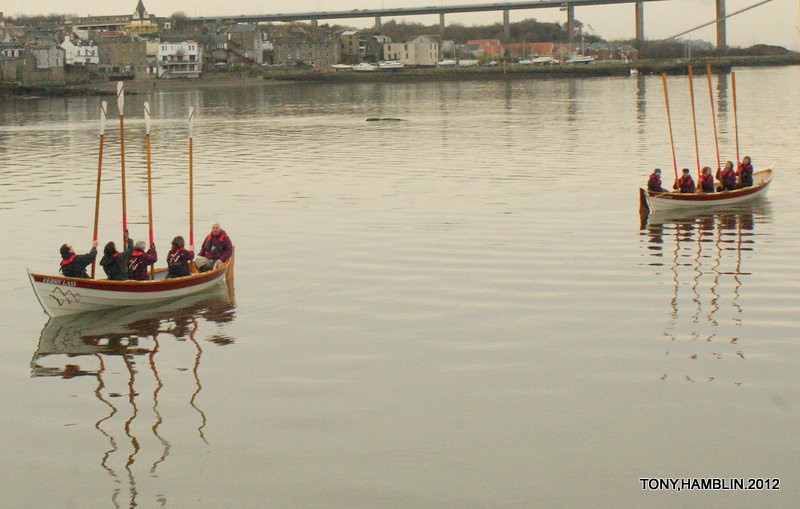 Mike Crockart MP tabled the following motion on the 6th of December 2012:

“That this House welcomes the launch of Queensferry Rowing Club’s second skiff, the Ferry Maid; congratulates the club on the excellent work it has done to date in encouraging coastal rowing in its first skiff, the Ferry Lass; notes that there are now 40 St Ayles skiffs on the waters around Scotland and the North East of England with clubs encouraging wide participation and community involvement; further notes that the Queensferry Rowing Club has over 60 members and is continuing to develop its members’ skills and talent; and applauds Scottish Coastal Rowing for its involvement in promoting water sports and community involvement which will serve Queensferry for years to come.”

We would like to thank Mr Crockart for his kind words.