Until the 1950s there was a long history of competitive rowing using wooden boats and the Scottish Coastal Rowing Project was designed to bring about a resurgence of a traditional activity.

While Ferry Lass was being built, several of our members looked into the history of rowing in South Queensferry in particular. A number of photos were found and used as part of the initial search for members. Please find the photos below. 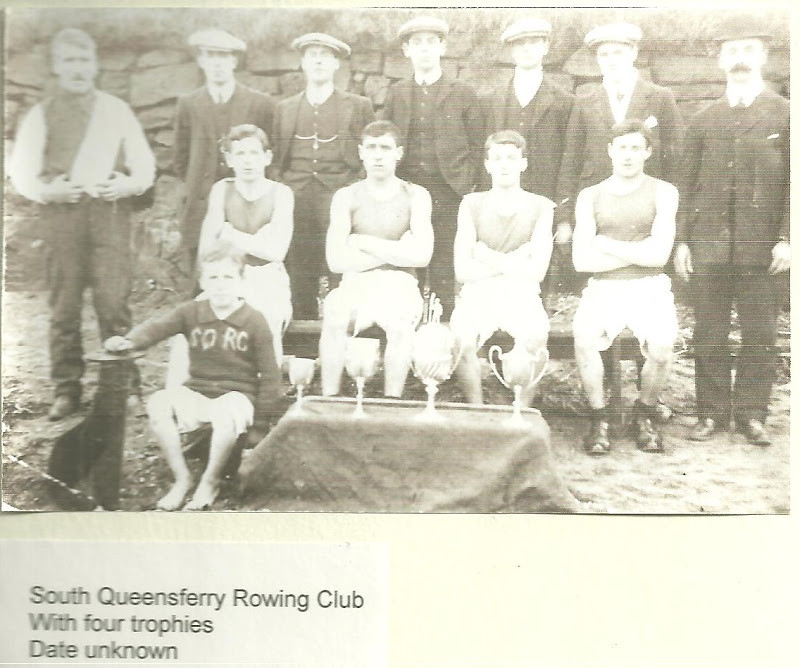 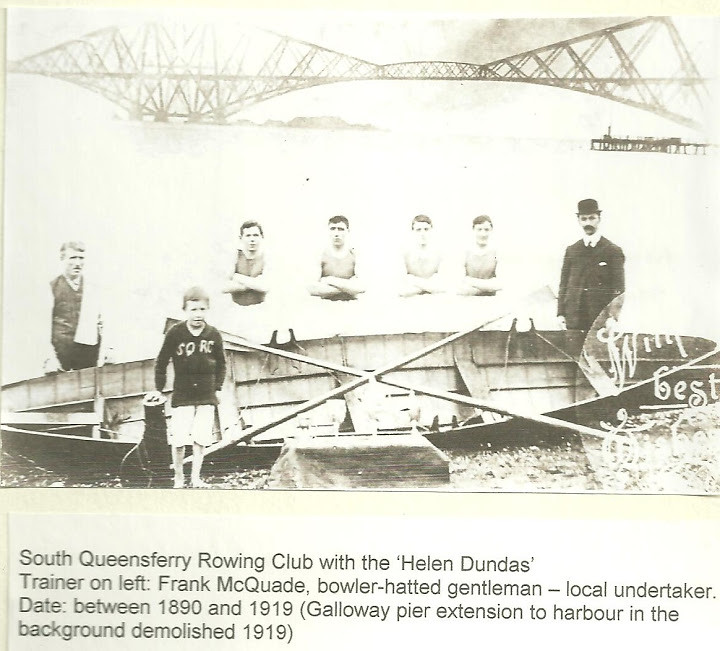 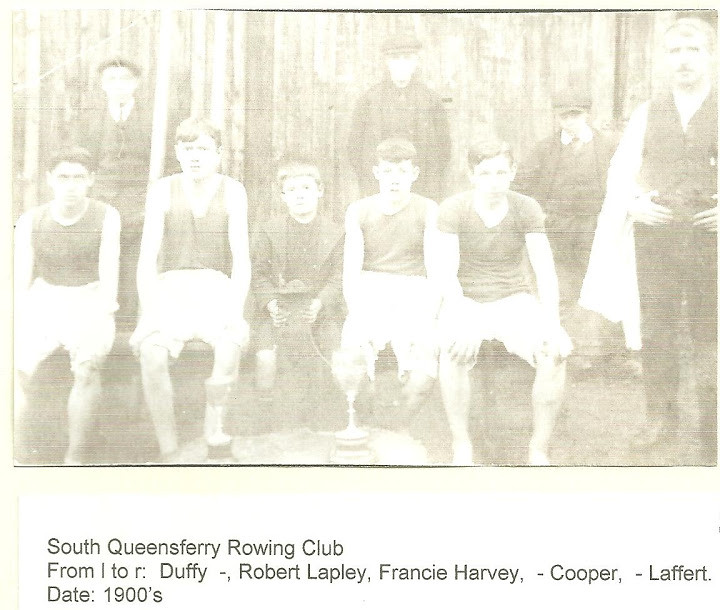 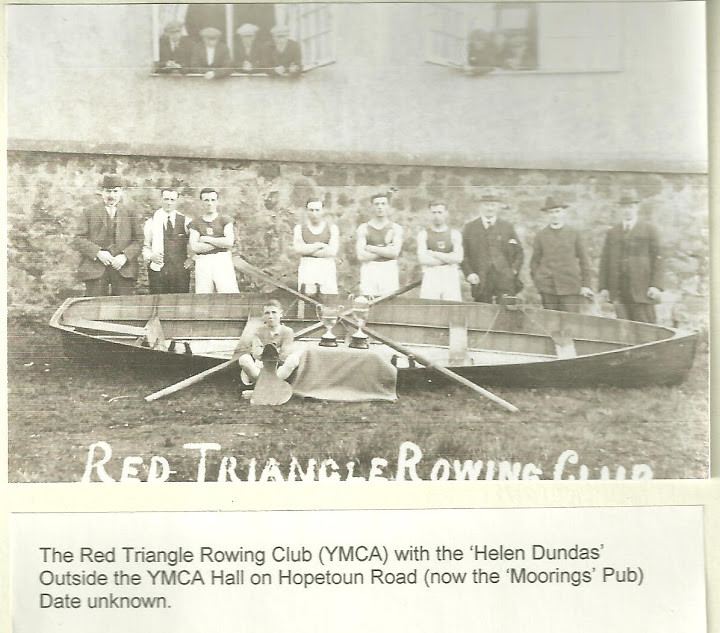 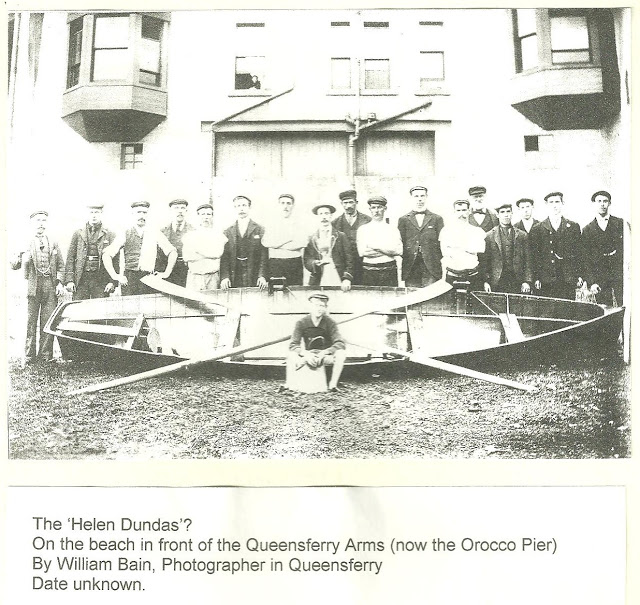 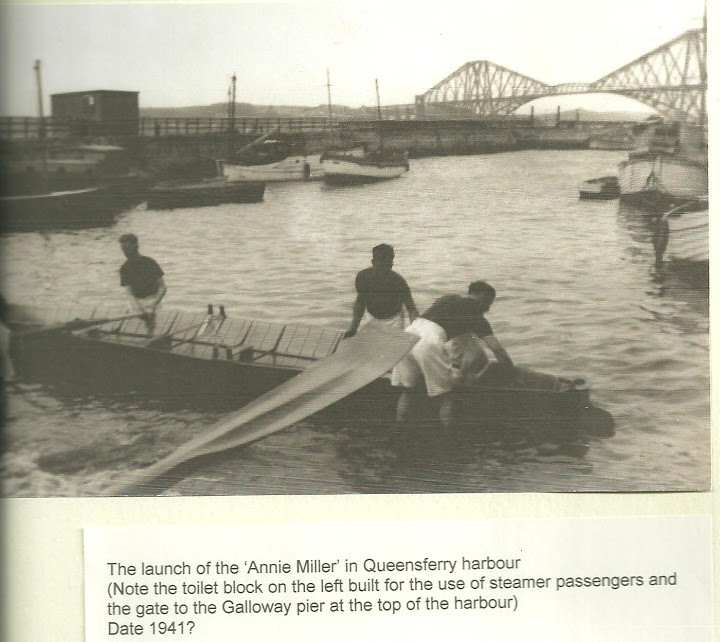 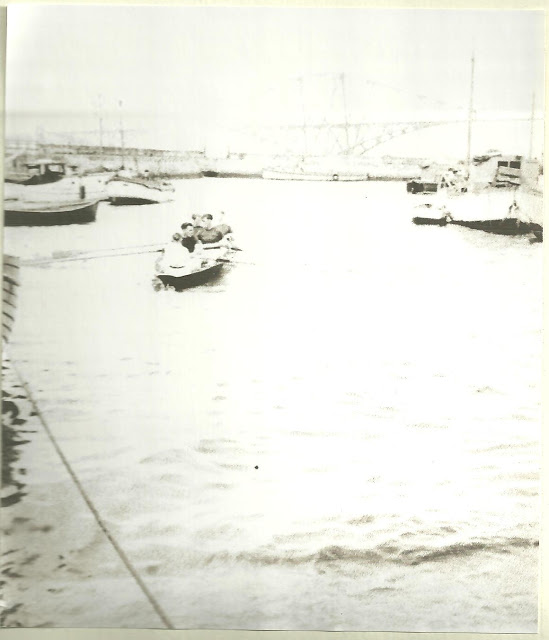 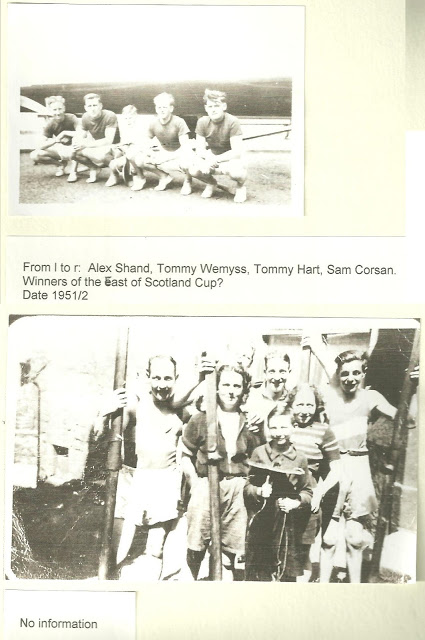 It is 2 years since the launch of Ferry Lass! Today marks a landmark for the club as we look back at two eventful years. Ferry Lass has done the club proud and continues to do so. Now, with the launch of her sister ship Ferry Maid, the club is busier than ever as both boats get ready for the summer regatta season.

With evening rowing about to restart, let’s hope that Ferry Lass will have many more birthdays to come!

The 24th and 25th of May will mark the start of regatta season, when Queensferry Rowing Club heads to the Port Seton regatta. But, this will only be the start of a busy calendar. This year, we will be heading up to Ullapool for the first ever World Championships!
If you are interested in rowing there has never been a better time to get involved. Please contact a committee member or come along to one of our sessions.

Last weekend was the launch of Ferry Sonnet, the second boat launched by our friends in North Queensferry. Both Ferry Lass and Ferry Maid attended – in some of the most exciting conditions we have experienced! Our enthusiasm for getting there was only matched by our ferocity in fighting the wind, waves and tide on the way back!

Saturday the 25th of May marked a number of firsts for Queensferry Rowing Club. Not only was it the first regatta of the 2013 season and the first regatta for Ferry Maid, but it was also the club’s first ever regatta win!
Port Seton was sun drenched as a valiant team fought their way to a photo finish in the mixed novice category. Peter, Andy, Nick, Julie and Anne put in a sterling performance.
Stay tuned for a full report on Port Seton 2013! 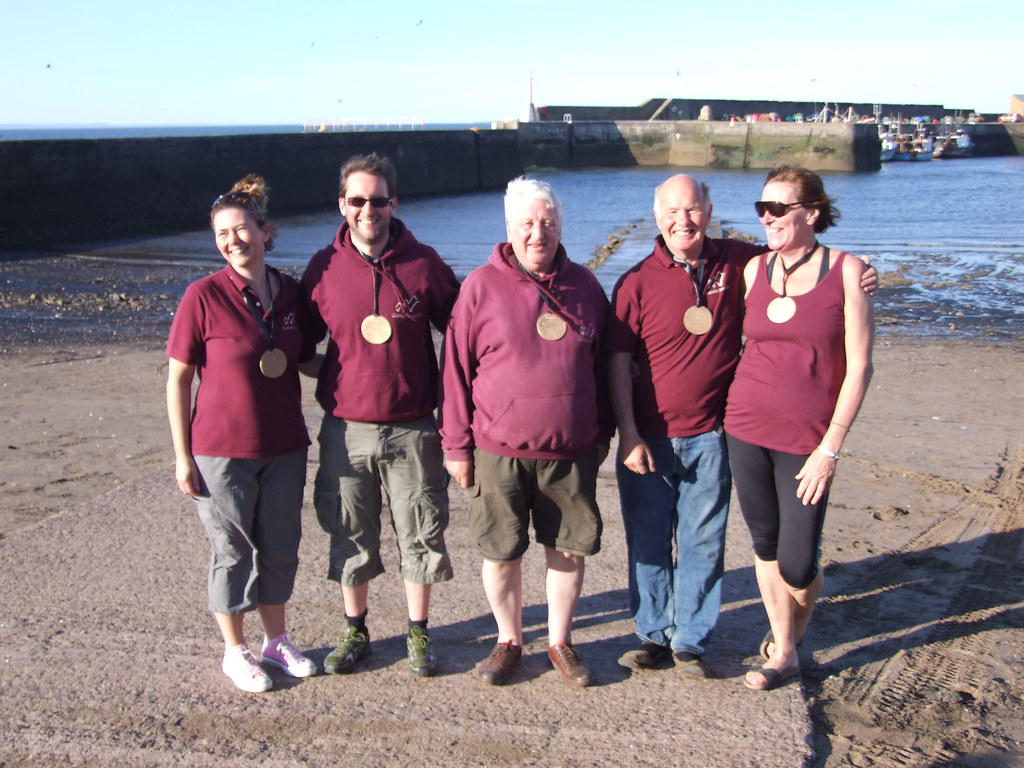 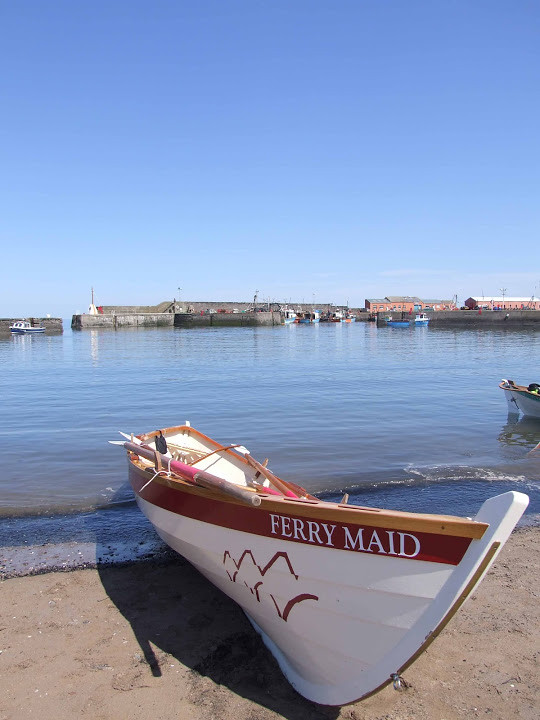 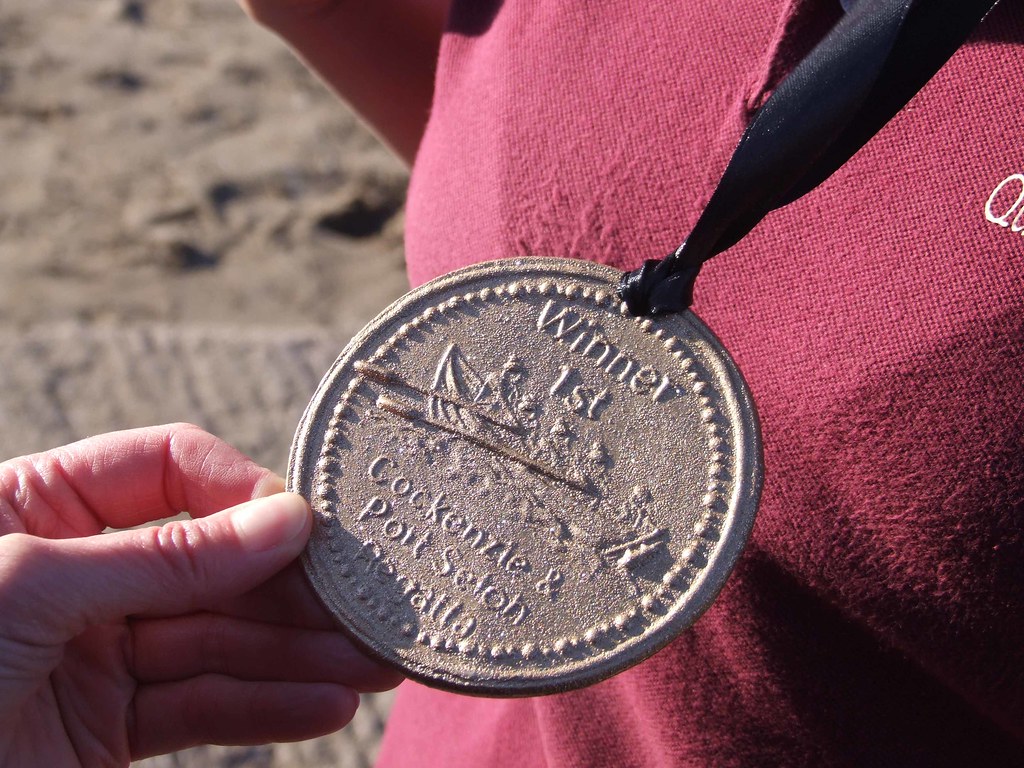 Our first outing of the season was to Port Seton on the 24th and 25th of May where we brought back a win in the Mixed Novice category.
Our first race was the Men’s Open on Friday afternoon. A blustery yet dry day. Unfortunately the Friday’s rowing saw defeat by Port Seton.
Our return on Saturday saw the sun beating down, indeed, it could have been the French Riviera, apt as Port Seton title their Regatta the Monaco of Coastal Rowing.
The Saturday racing took place out on the Forth, before moving into the harbour for the semi finals and finals. We entered the Men’s Decades, Women’s Decades and Mixed Open races but were unable to make an impact against the likes of North Berwick, Port Seton and Anstruther.
It was up to our Mixed Novice team to bring us hope of a Gold. Their first heat was against Pittenweem and Anstruther, winning with a impressive margin of fifty seconds.
The semi final was against Dunbar.  Some superb rowing gave the crew an edge as they powered to the finish line.
The final was against North Berwick, one of the strongest clubs on the Forth. With a perceived disadvantage of rowing towards the harbour first, Ferry Maid powered through the water turning beautifully thanks to excellent coxing by Peter Locke. It was neck and neck as they headed out into what was now a choppy Forth and rounded the final buoy for a final sprint towards the line, roared on by a large and vociferous support.
Both boats crossed seemingly together. Silence descended on the pier. A few people called it a dead heat. Then… the umpire raised his hand indicating that we were victorious by the narrowest of margins, half a metre. Cue massive celebrations from the crew and those on the harbour wall.
The crew consisted of Peter Locke (Cox), Nick Jenkins (Stroke), Ann (Port Seton), Julie McKeever and Andy Jarvis (Bow).
Is this the beginning of a promising season? A good omen for the inaugural St Ayles Skiffs World Championships? Here’s hoping.

This Saturday marks our first attendance of the Troon Regatta…. involving an incredibly early start. But hopefully tiredness will be defeated and we will see more success like at Port Seton.
Ferry Lass will still be available for anyone not attending Troon, so do feel free to come along at the usual time for a Saturday morning row.
Watch this space for the aftertroon results!

Under a scorching sun, Troon Coastal Rowing Club put on an extremely successful regatta. We would like to thank them for their warm hospitality and attention to detail in running the event.
After the success of Port Seton, Troon’s regatta was a chance to consolidate our improving skills. The crews did not disappoint:
1st Place – Men’s over 50 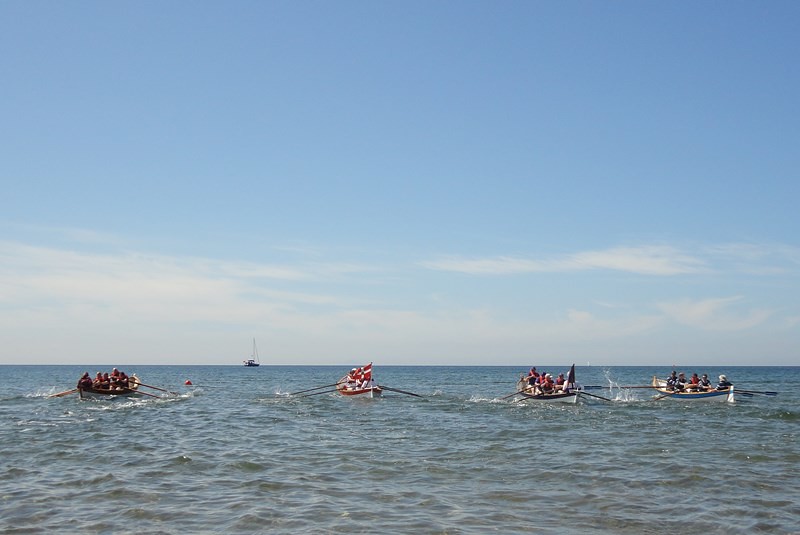 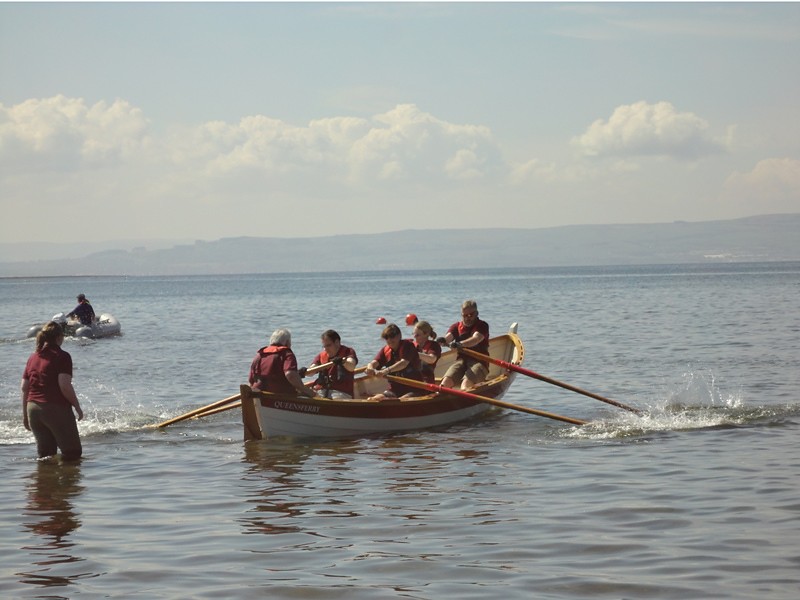 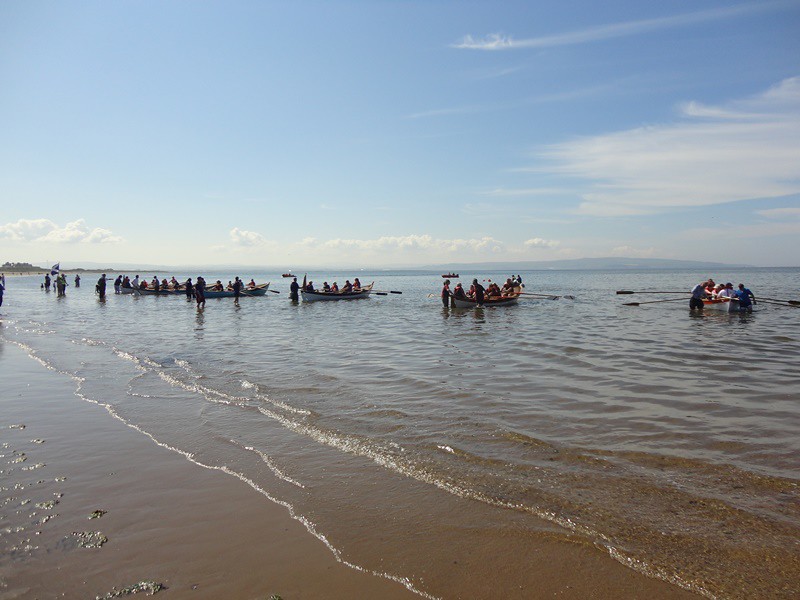 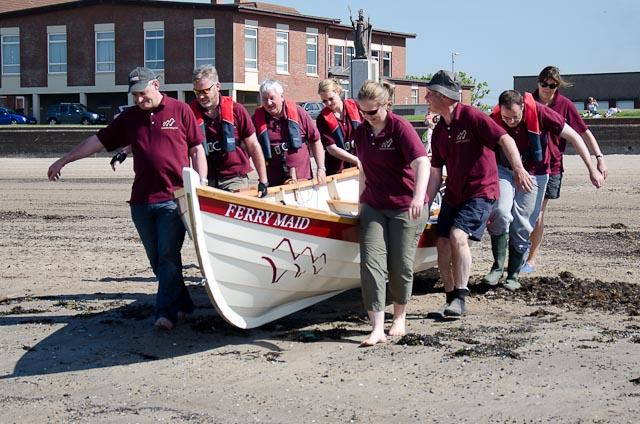 It is a busy time in the coastal rowing calendar. Having had success at Port Seton and Troon all eyes are on the upcoming world championships at Ullapool. In the meantime however, there is a regatta at Dunbar on Sunday, to say nothing about our annual jaunt up north to Port Soy. It will be a busy few weeks for the club!

Our regular sessions remain popular and are being supplemented with extra training, ably led by Siobhan. If you have ever been interested in having a go, there has never been a better time to get involved.

We have already commented on how much we enjoyed out time at Troon, one nice touch was the presentation of a photo at the end of the day. Take a look below, or come down to see the original, we’ll have found someplace prominent to hang it! 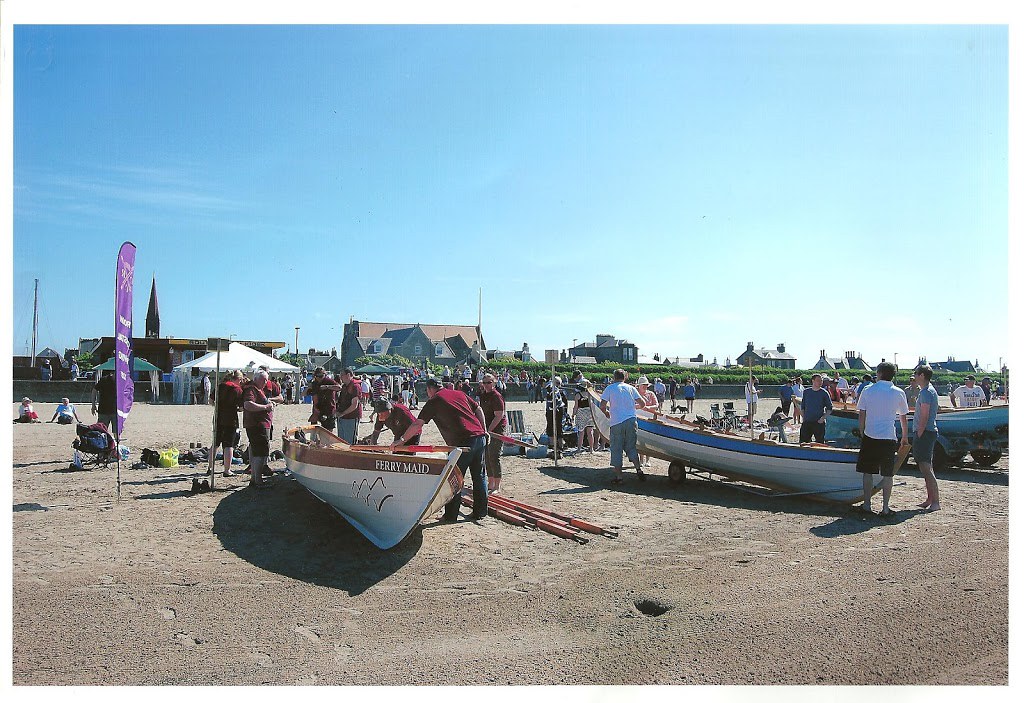 The conditions were perfect for rowing on Sunday and Ally, John G, Julie, Donal and myself took full advantage, with a leisurely row to North Queensferry, around Inchgarvey and then heading towards the Hawes Pier.
We encountered a rather beautiful wooden sailing boat which, after a little detective work, we believe to be a Drascombe lugger. 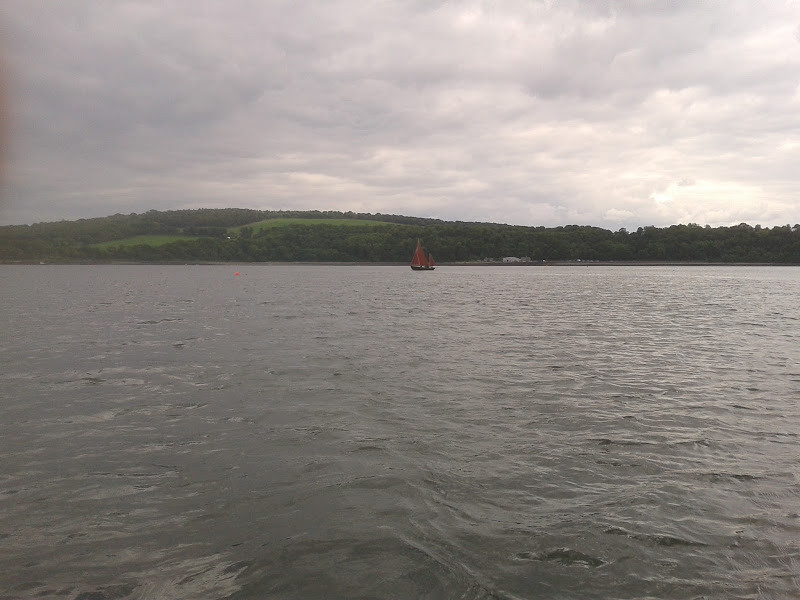 We held position just off the Hawes Pier in order to watch and cheer on the dare devillish antics of Sharon and Denise as they took part in a charity abseil off the Rail Bridge to raise money for Queensferry’s Care in the Community Project.
The incoming tide made holding our position tricky – so we headed back to Port Edgar.
The next few weeks are going to be a busy time for the club – Next weekend we will be attending Portsoy. In previous years Portsoy has been the highlight of the SCRA callendar – three days of rowing and camping alongside the Traditional Boat Festival.
But the event everyone is looking forward to is “worlds” up at Ullapool – Can Queensferry Rowing Club gain some world champions? 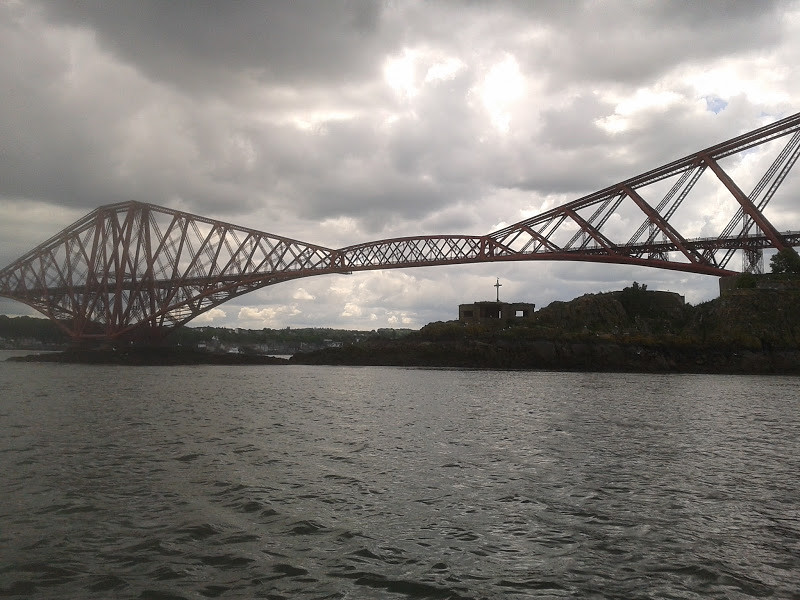 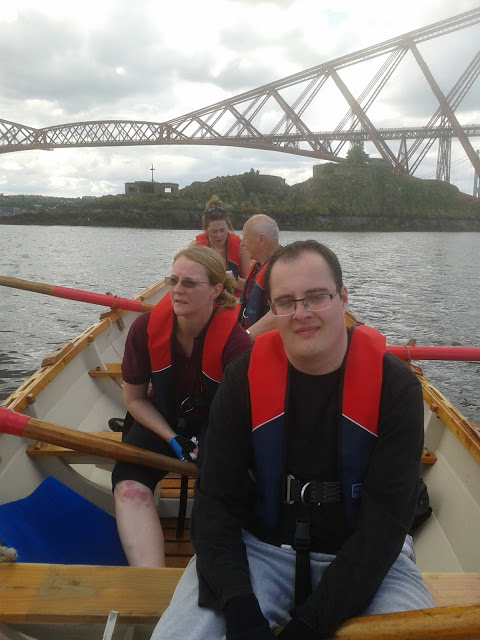 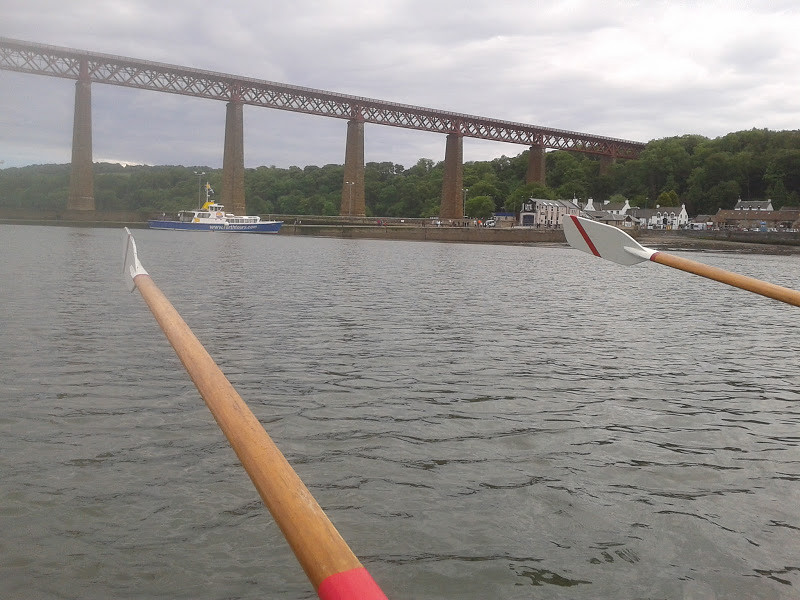 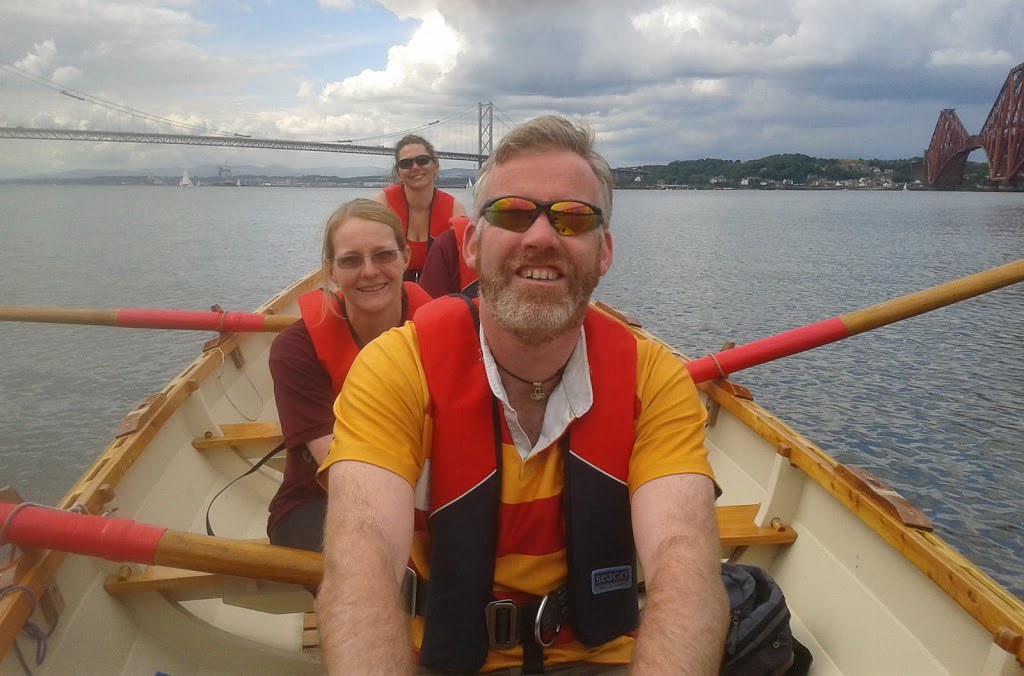 Last year’s trip to Portsoy was a real highlight. Tomorrow, our gang of intrepid rowers will be making their way back up North for Portsoy 2013! 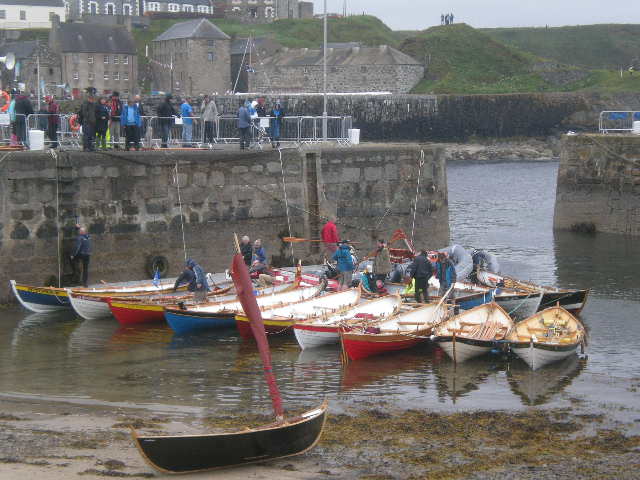 Having checked the weather forecast…. it will probably rain… a bit… But our enthusiasm will not be dampened!

Portsoy is a weekend event, held over the Friday, Saturday and Sunday. Held in conjunction with the traditional boat festival, there is always plenty to see.
The camping part of the weekend has always been a great way to get to know rowers from other clubs – especially when the raffle prize was a Gallon of Whiskey and they didn’t want to bring it home with them!!
I present: Exhibit A! 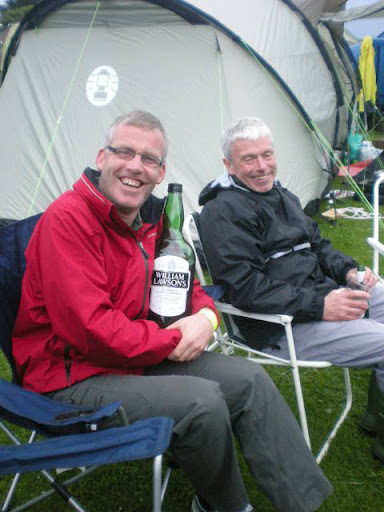 For the third year running we made our trip up north to Portsoy. As part of the 20th annual Portsoy traditional Boat Festival, we competed over a long weekend. We would like to thank Portsoy for the hard work they must have had in organising such a fine event. A lot of fun was had by all.

A full report will follow, but in the meantime we present – Portsoy 2013: the Video