On Sunday 17th May Queensferry Rowing Club had the important and exciting task of  conveying a bride from the Hawes Pier to the Old Harbour. She had seen our boats out on the Forth and thought it would be a good way to arrive for her wedding ceremony at The Orocco Pier.

The main concern was the weather and as the day dawned it was as forecast quite windy but dry and I think we all had worries that the bride would call off but no, we were informed that she was ready to go no matter what the conditions. Two boats and crews set off from Port Edgar to row to The Hawes to meet our brave lady and we had a good blow down with the strong Westerly behind us. It was clear that the row back to the Harbour was going to be heavy going and the sea was quite choppy nearer the Hawes.

Our bride was on time and on arrival with some family members on the small beach behind the Pier she changed her posh wedding shoes for her wellies and looking absolutely radiant she was assisted into the bow of Ferry Maid.

We had made provision for her comfort with a soft cushion, a bird cage umbrella and plastic covering to keep her bridal dress dry. By this time our other skiff, Ferry Lass was just off the beach and we were joined by one of the North Queensferry skiffs, St Margaret’s Hope who escorted us out around the Hawes Pier towards Orocco Pier where her guests were gathered on the balcony to watch her arrival. They had not been informed of her mode of arrival so they had a spectacular view of the boats bumping around into the strong wing and fairly high waves. She smiled and shouted with excitement as we went up and over the swell and after rowing close in to the balcony where her guests were, Ferry Lass and St Margaret’s Hope positioned either side of the harbour mouth and hoisted oars in a salute as the bridal boat rowed into the harbour to be met again by family members and some of our Club stalwarts who helped her off the boat as gracefully as possible to continue the walk to her ceremony.

We believe that this is a first for St Ayles Skiffs and we are very proud to have been involved in making a bride’s wish come true.

Queensferry will host their regatta jointly with North Queensferry on Saturday 27th June.  Check out the information for clubs.

This time the wedding bells were ringing for our very own Sharon and Richard.  Lorna had lined up the crews for a surprise guard of honour, and a few balloons, for the happy couple but the cat had to be let out of the bag when our bride requested a photo shoot with the boats! 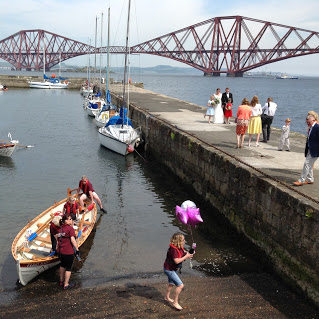 The weather was fantastic and the crews enjoyed a row down to South Queensferry harbour to meet Sharon and Richard who were looking dapper in their wedding finery. 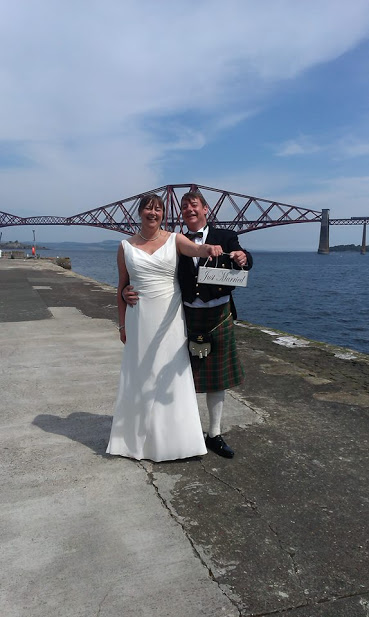 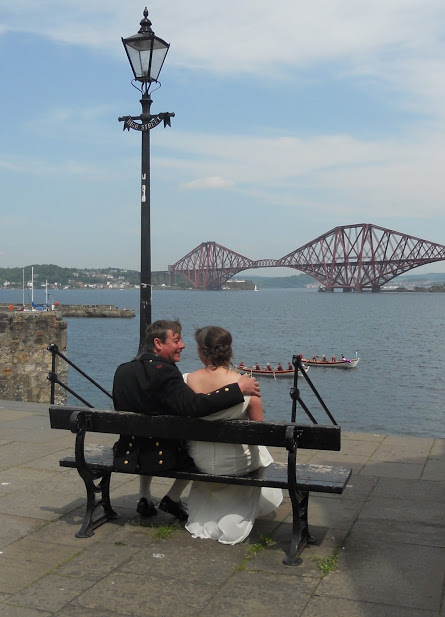 Congratulations to Sharon and Richard!
The first in-club wedding … is that a first for Scottish Coastal Rowing too? 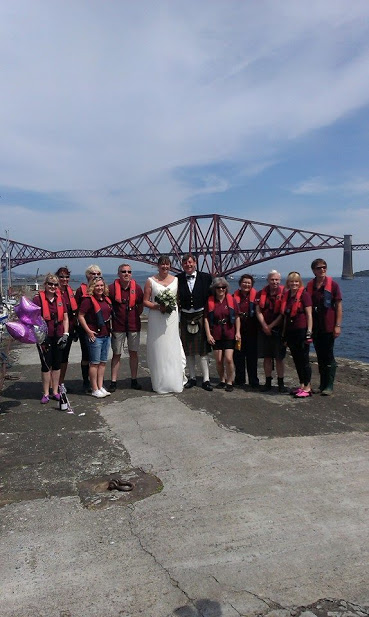 27 June saw ten boats descend onto the Forth for the Queensferry Regatta 2015. Below: the results! Photos will be posted in the coming days.

On 27 September we joined a dozen other skiffs from north and south of the Border for a glorious excursion up the Tweed from Berwick. With so many boats being unloaded and moved to the beach there was a bit of congestion – but as always, many hands made light work. 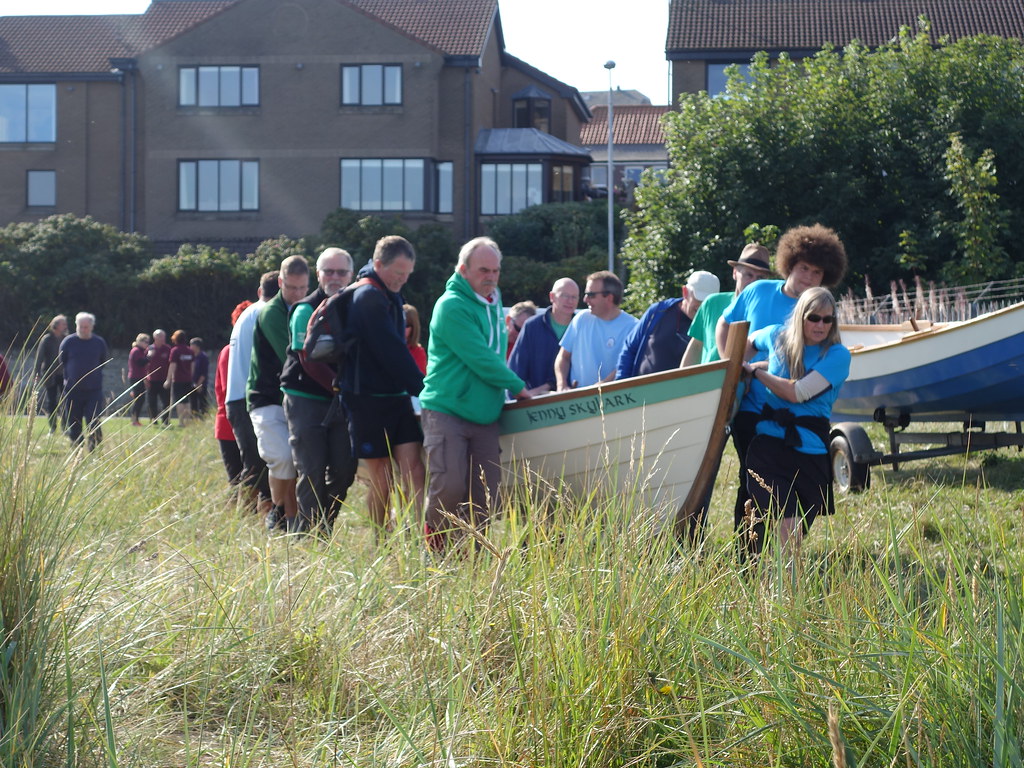 One skiff attracting attention was the Latimer Ledja, from Whitburn, Tyne & Wear – the fish’s head and tail were beautifully crafted and bolted on. Not only that, but the crew donned yellow sou’westers and bushy beards. 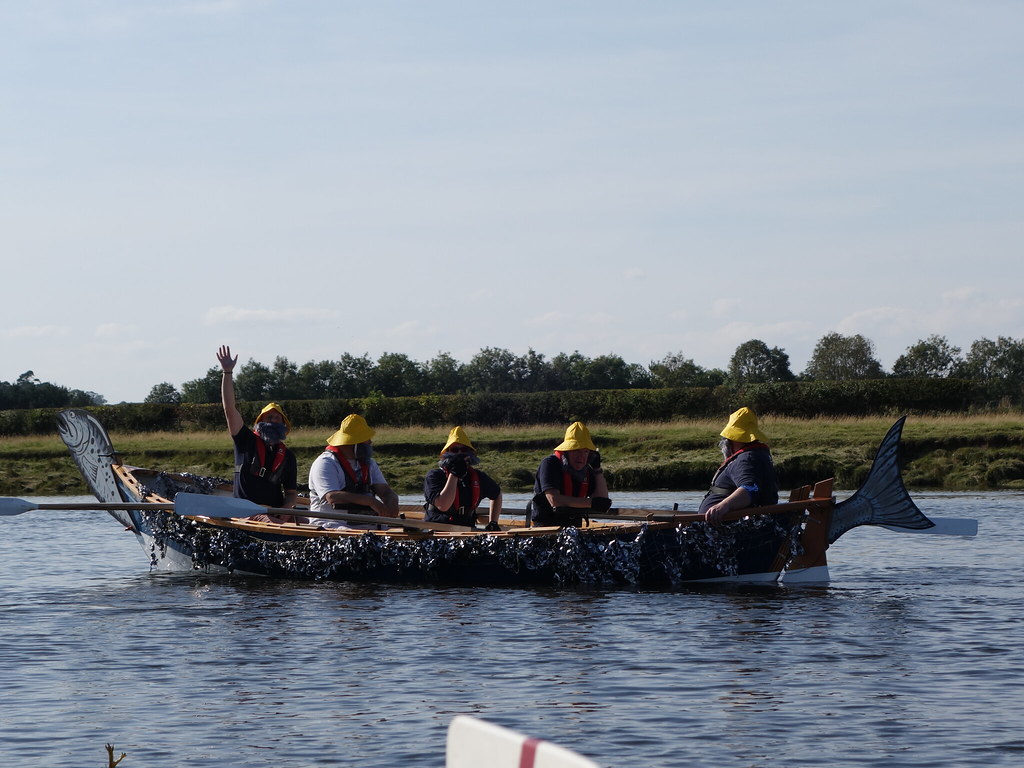 The row upriver took about an hour at a fairly leisurely pace, but the surroundings were so beautiful and the weather so kind I think none of us would have minded if it had taken longer. The downriver crew and supporters drove to Paxton House and stopped along the way to cheer us on from various bridges. The picnic site was idyllic. 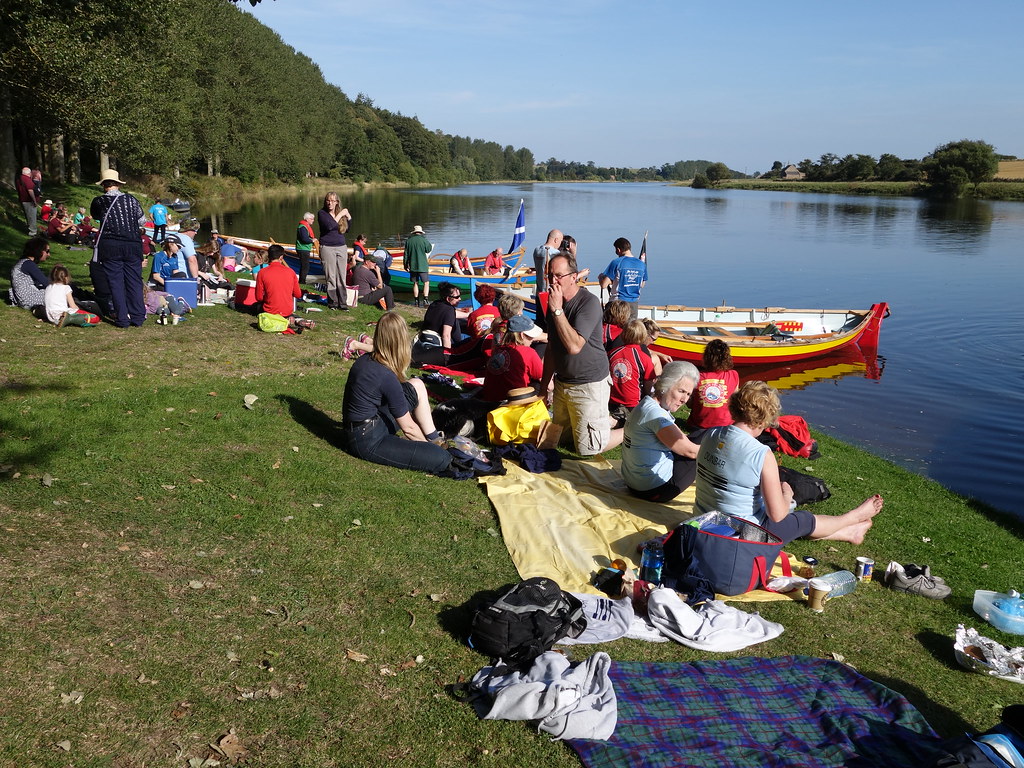 After we’d all stuffed our faces and visited Paxton House, the downstream crew set off and the rest of us headed away, some homeward bound and some back to Tweedmouth to welcome the boats in. A wind had sprung up and the crews reported it was a tougher row back down the river. 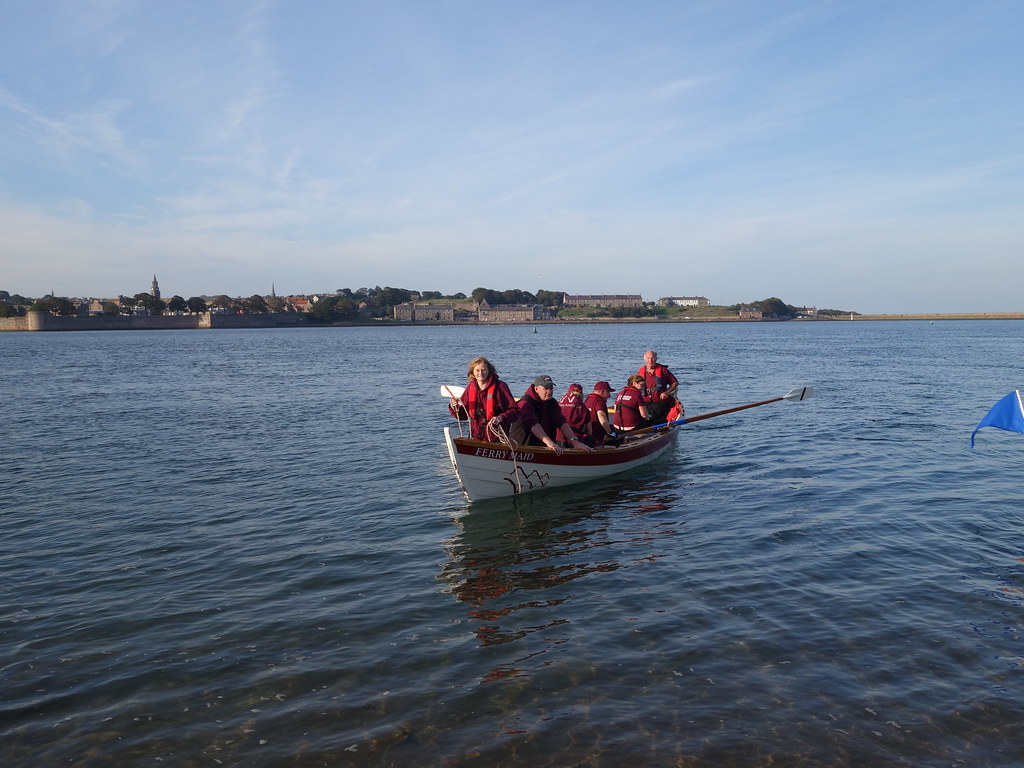 Katya Bacica of Rowporty was commissioned to create a video about the St Ayles skiff for the Southampton Boat Show – keep your eyes peeled for our fine crews!

CAPTAIN’S REPORT
A cold and dark start at 6.45am for some of us on the road to Loch Katrine – and it felt every bit like Winter! On arrival at Loch Katrine there was much need for caffeine amongst the imminent arrival of both skiffers and boats.

Eventually the sun did come out and what a beautiful setting Loch Katrine was with glorious autumnal colours surrounding us. The 650m sprints were highly enjoyable and a fine day was had by all 5 Scottish Regions. Stuart Mack our Regional Captain had this event very well-orchestrated with 18 races planned throughout the day. All races were in timely fashion, a few small delays in the afternoon, but overall a great success. 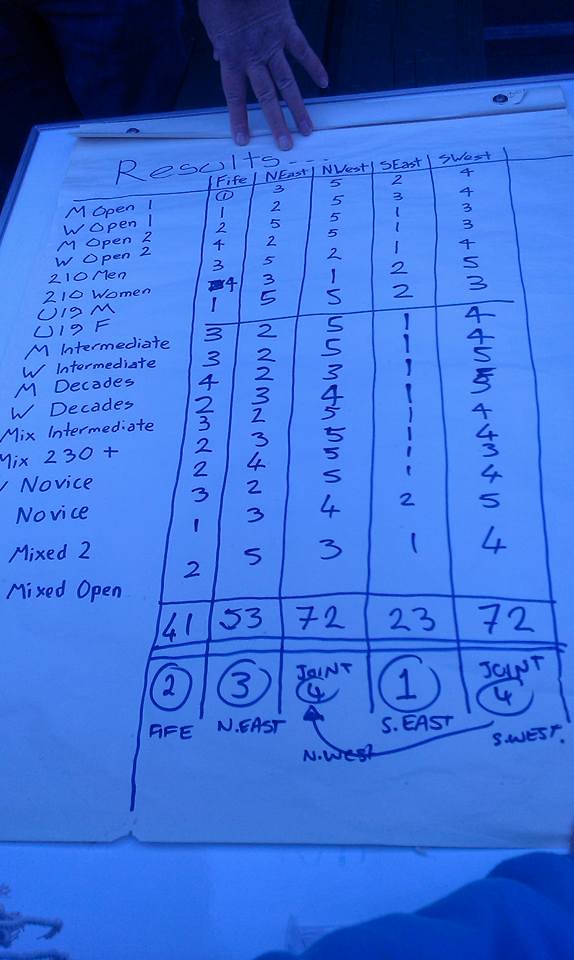 There was much excitement by everyone keen to try out other skiffs. South East Region were victorious and won back the trophy for the Region. Well done us all!!

South East rowed the Port Seton boat very well indeed and throughout the day most “wins” were first or second place.

The races were timed around the amazing Sir Walter Scott Steamer, which crossed our course six times during the day, which we all enjoyed watching from both on and off the water. This amazing boat still working today, takes pleasure cruises up, down and around the Loch. There was also a small steam boat (provided by the gentlemen of the Steam Boat Association of Great Britain) which was helping to umpire our races and a pleasure to watch. There will be some pictures on our website soon.

Which brings me to another great win for Queensferry – both Maria and Keith came first in their respective races. This was acknowledged as the end of their Novice status – so well done both. We have the medals for you!

Rachel and I were pipped to the post by North West in our race, but we came in a very close second!

In between our events we managed to enjoy a leisurely stroll around Loch Katrine and we met one of the owners of the Sir Walter Scott Steamship, whose grandfather had helped to build the boat – and had a few interesting tales to tell.

It was great fun to attend this Regional event and looking forward to more of them as it gave all of us an opportunity to chat to skiffers from all over Scotland.

Both Rachel and I attended the AGM post event, a separate update to follow which will be posted on our website, following our Committee meeting on Tuesday 27th October.

Click here to see the Guardian’s photo-feature on the Freshwater Sprints, pictures taken by Murdo MacLeod.

Great video of the Freshwater Sprints by Niall Odhar – complete with appropriate music!

On the 7th and 8th of November the tides are back in our favour for social rowing, which will be at the normal times, Saturday from 9am and Sunday from 1pm.

Ta da!  Marion and Barbara  have produced a calendar for the club for 2016, via an online service. The more we print, the less they charge per unit, so we’d like you to give us an idea of how many you might be tempted to buy for yourself and as Christmas gifts for your loved ones, work colleagues, passing acquaintances etc etc.

The finished product will be 13 pages, printed on 150gsm smooth silk A4 paper with a plain white backing card, and is bound with white wire and a hanging clip. As for the photos, we chose a shortlist from the many hundreds available and conducted a poll of the small crowd at the shed today for maintenance and rowing. We then chose the most popular. Some had to be used in a small size because the resolution wasn’t great, and some had to be left off entirely for that reason. Happily then Tony J and Rachel H contributed yet more cracking shots, including the April one. (Please note that the following images were cropped from screenshots, any stray black lines at the sides will not be on the final calendar.) Please email Marion with your estimates!

Here are the pages…. 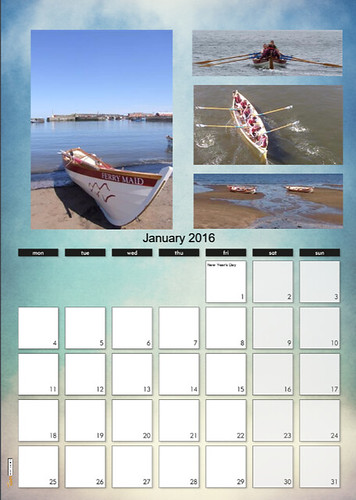 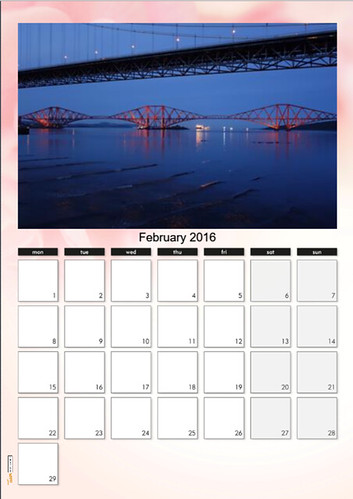 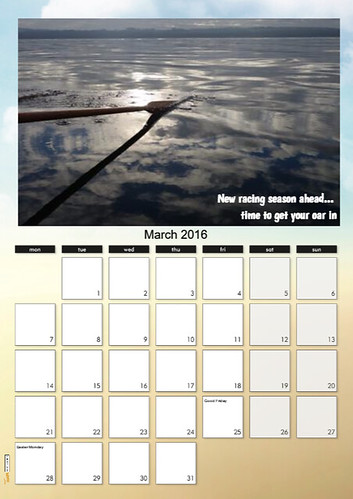 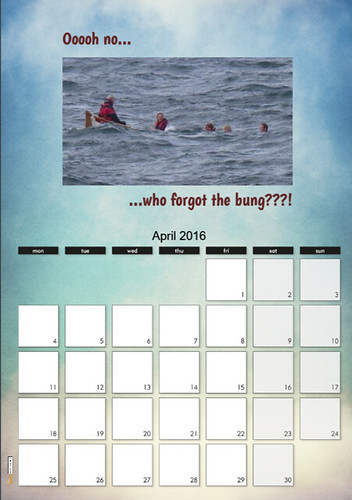 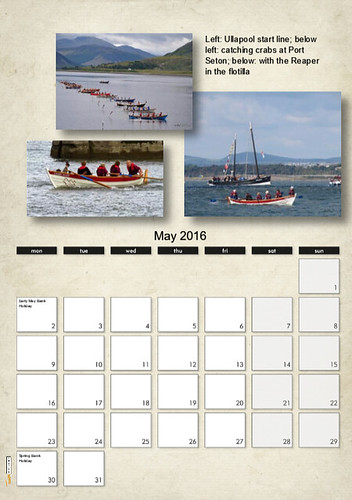 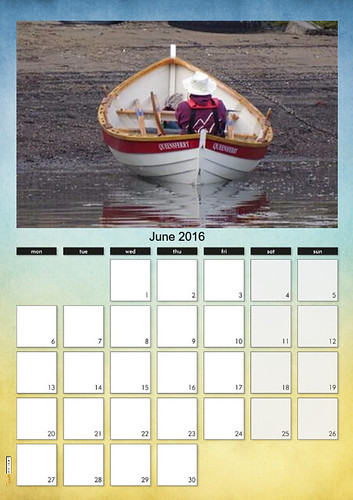 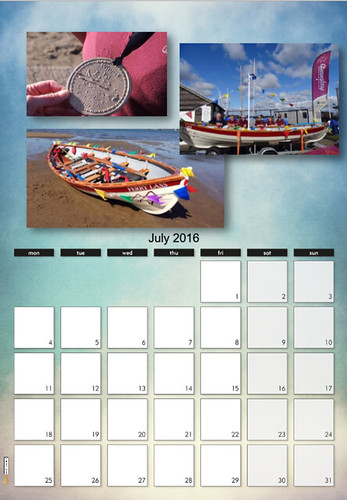 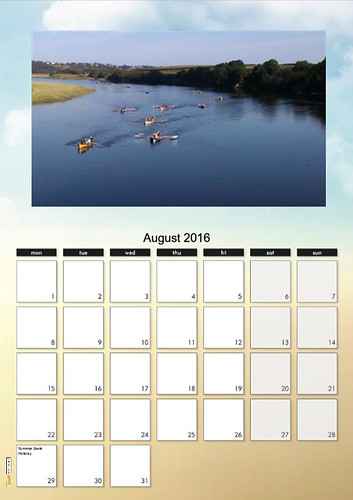 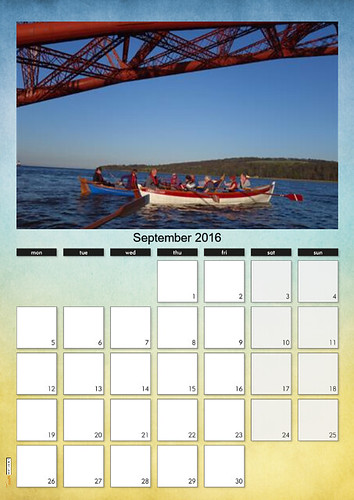 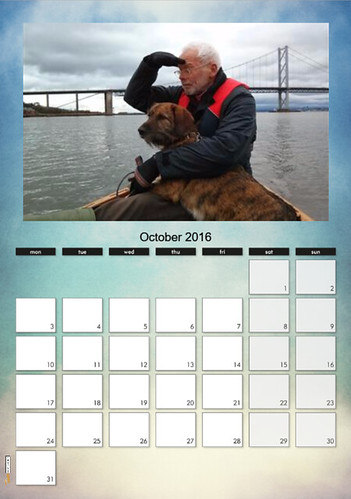 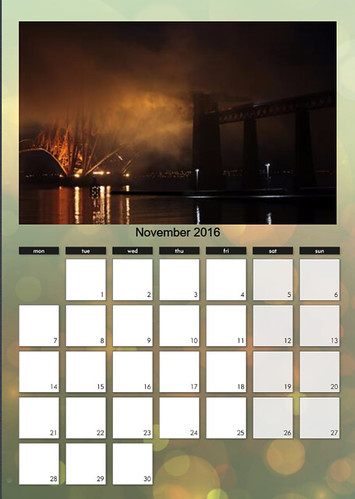 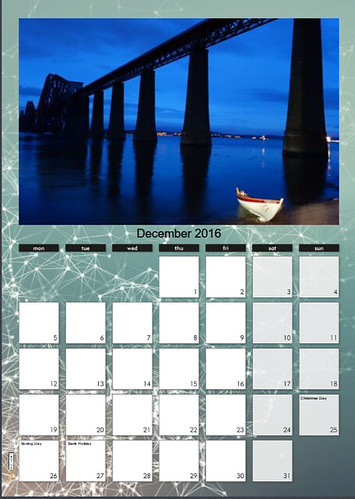