Tracey writes: The Beast in the East… Well, the North Berwick regatta to be precise…

The day was here. Pleasantly pleasing the sun was out and conditions looked, I am told, unusually well on the water.

To be frank you can’t judge a place until you’ve seen it or rowed it! What am I referring to is the now infamous Craigleith Island and the part it plays in the North Berwick Regatta! Sitting there firmly – well it is volcanic lava rock which can be used in curling stones apparently, as you curlers will be aware. A bird sanctuary it may well be, but oh what stories to tell on a coastal rowing regatta day! We were reliably informed from the commentary over the speaker system (more on that later), that this is one of the longest St Ayles skiff coastal rowing regatta courses.

The day commenced following the Coxswains’ brief by the mens 50+ race, which from the shore appeared to be a close, hard contest on the straight trip home, with Queensferry amongst the main field. Apparently a 360 penalty was awarded to a team who shall remain nameless (not Queensferry) unsure why? Queensferry was a commendable 6th place.

Next was the Women’s 50+ which was not without its drama! We began well, but soon became the filling of a sandwich on the approach to Craigleith, with boats either side, resulted in clashing of oars. Requests for more water were raised quite loudly, but received no attention. Despite a jamming of an oar under one of the boats, we were then requested to ‘go to port’ over the radio – but there was no water there either, as we remained the filling in a sandwich or perhaps a baguette at this stage.  We were coxed out of our position with little umpire intervention (it has been quoted –they must have nipped away for an Alandas ice-cream… other ice creams are available). Eventually one of the boats was advised on a number of occasions to stop rowing and had become entangled in the other half of the sandwich/baguette, so we managed to slip away! This however had cost us time and we had to try to catch the rest of the field. However on a positive note we survived to row other races, safely!

The races continued, and the sun and heat intensified up to an impressive 24 to 25 degrees. The running commentary throughout the day was highly entertaining, Saint and Greavsie style AKA Ian Baird and Clive Rooney (North Berwick rowers). During the rowing there was an interlude when we were informed that three swimmers were approaching the beach who had set off that morning from Elie across the water! We were encouraged, and a number of us went down to the water’s edge to congratulate them to be informed it was all ‘just for fun’. Ten miles!

Back to yet more rowing dramas! As the Mixed Novice race set off the tide was going out and rocks were to be avoided east of the beach. However the rudder was applied and next we came to a sudden halt with the rudder coming loose. A quick examination revealed a gudgeon was out! A rapid repair with a makeshift hammer -also known as the anchor – and use of a tent peg to straighten a bent pinion (forgive me if I have the incorrect names of the parts) and we were good to go navigating around the rest of the rocks to the start line.

During the race we kept up with the main group, although on the rear of Craigleith it was noted the waters had begun to swell more than the calmer morning races. A wave was caught and a crack was thought to be heard by some crew members, but we continued to battle through and in the end were putting a number of 10 hard sprint rows to keep a boat in our wake. We finished an admirable fifth position.

The 240+ racing crew also achieved the position of fifth, however we were disappointed to read the report sheet at the end of the races that this race was untimed.

The Mens Open crew also had drama, with the breaking of the number 2 oar 200 metres into the race, and therefore had to withdraw disappointingly from the race. Yes you’ve guessed correctly that was the crack heard earlier!
With a changing of the whole set of oars the last race of the day Women’s Open, was delayed somewhat by the returning of the dinghies also racing further east. Another hard race and red faces returned to the beach. We Survived The Beast in the East! 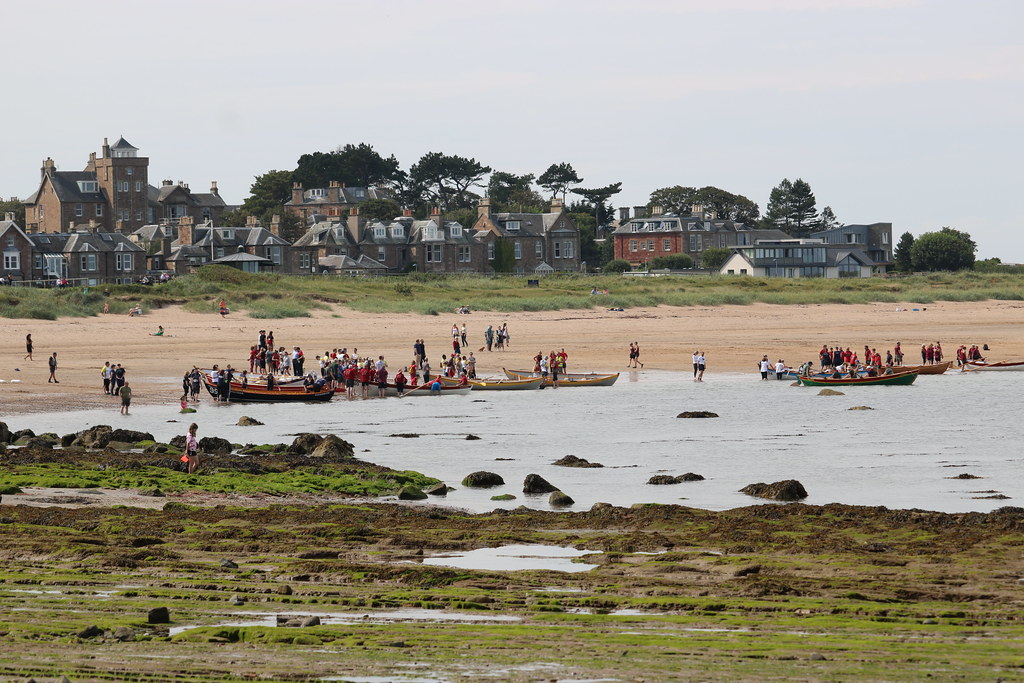 It was, I must say, a great day. I’m sure folks will say we were lucky with the weather and the sun block was in use. It was a great team effort and the G&Ts were well deserved! The only big disappointment was the selling out of the Lobster!

I would like to finish by sharing a Chinese Proverb:

Barbara adds: North Berwick Rowing Club have shared their photos from the day on their Flickr. Our own Flickr photos are here.