Mike McD writes: In researching the history of rowing at Queensferry we came across some interesting stuff…

The organisation of the annual Regatta was largely the responsibility of the Navy, but by 1898 there was both a Queensferry Regatta Club and a Queensferry Rowing Club, whose Secretary was Mr George Anderson.

Much of the day’s activities were centred around the harbour and in Sept 1899 this included a ‘Grand Water polo match’, and an exhibition of ‘graceful and grotesque’ diving and swimming by members of the Alloa Amateur Swimming Club. After the racing there was a ‘duck hunt’ with live ducks followed by a ‘greasy pole’ over the pier (prize – a live pig) and an upright greasy pole, for a ham (a Ferry Fair event). 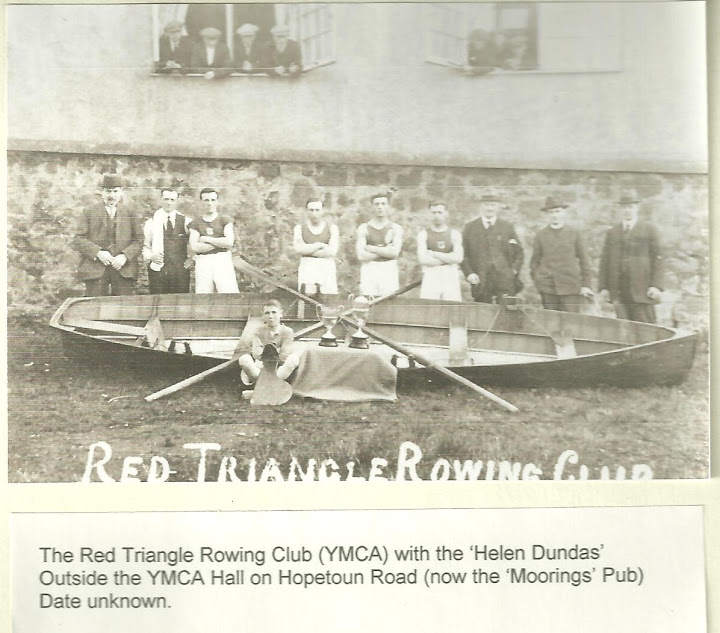 Queensferry won the Naval Challenge Cup three years in succession – 1899, 1900 and 1901 with their four-oared jolly boat ‘ Dundas’, J Lafferty, stroke oar and the ‘Helen Dundas’, W Wilson, stroke oar. By 1905 there was more silverware on offer, with the Mackintosh Cup, presented by Mr Hugh McIntosh of the Queensferry Arms Hotel, for four-oared jolly boats rowed by a crew under 18 years of age. (promoting youth participation – not a new idea!). The Rowing Club also owned three two-oared boats – ‘Susan’, ‘Empress’ and ‘Mary-Ann’.

The Naval Challenge Cup (now held by Queensferry Boat Club), is inscribed: “Presented by Capt. G.W. Russell and officers of HMS Rodney and Cmdr. R.H. Stokes and officers of HMS Caledonia. To be pulled for annually at South Queensferry in four-oared jollyboats, with a coxswain. Open to all Boating Clubs in the upper reaches of the Forth between Alloa Inch and Inchgarvie Island.”

This is the oldest trophy in the Boat Club’s possession, and was tracked down at Ladyburn Amateur Rowing Club in Greenock and returned to Queensferry in the 1950s with the authority provided by Capt Pond, at the time in charge of Port Edgar.

My thanks to Douglas C who has sent me a copy of the West Lothian Courier of October 21, 1899, which reports on the Queensferry Rowing Club Concert which took place in the Rosebery Hall that week. Cmdr Charles Hope Dundas of Inchgarvie House (later Vice Admiral) just happened to be serving on the guardship HMS Rodney and had been invited to be ‘Commodore of the Regatta and Clerk of the Course/Starter’. He and his wife attended the concert (she sang A Sailor’s Lass and A May Morning), and he presided over the evening and presented the cup. He said that when the cup was talked about it was originally intended for a N-S race. He was glad it had it had been won by Queensferry this year (North Queensferry won it in 1898, the first year), despite a bad start, losing half a boat length, but winning by “a good number of boat-lengths”.

Mr Anderson replied that the Club was started for the 1898 regatta and a month before, four members had bought a boat themselves and by hard practice had come a good second last year. (NQ being the recognised winners over the past 3 – 4 years). The club now had four boats. 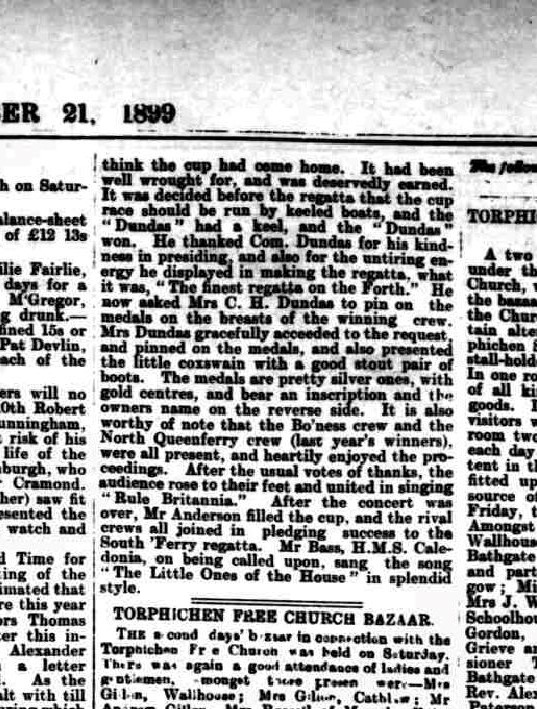 Barbara adds: These three clippings are from the West Lothian Courier of October 21, 1899. The full page can be viewed by clicking here. Highly recommended – it is action-packed.

Equally worth reading is the page from April 8, 1899, click here to see that one.